Are Your Expenses For a Defunct S Corporation Deductible? 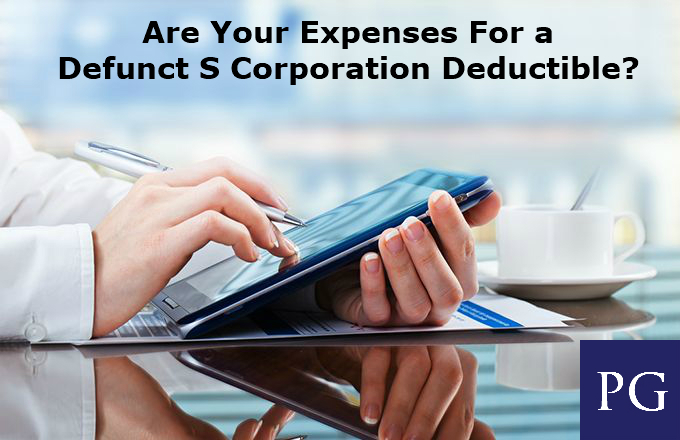 You should have seen his face when I told him that he was out of luck. Neither he nor the S corporation can deduct those expenses.

No Deduction for the S Corporation

The tax law is clear: your payment on behalf of your S corporation does not by itself create a deductible expense for you personally because you did not incur the expense. Instead, the no-longer-in-existence S corporation (a separate legal entity) created the expenses and it did not pay them; therefore, there’s no tax deduction. [Brown v Commr., T.C. Memo 2017-18]. Also, In Cocke, the court said it is a “general tax principle…that deductions for expenses can be taken only by the party who actually ‘paid or incurred’ them.” [United States v Cocke, 399 F.2d 433, 447 (5th Cir. 1968)]

Since (1) your S corporation is defunct and (2) the S Corporation didn’t actually pay the expenses, it gets no deduction for these expenses.

Conclusion: I had to tell this person that he couldn’t deduct the expenses personally since he didn’t incur them in his trade or business [IRC Section 162(a)].

I also had to tell him that he can’t deduct the expenses as incurred for the production of income, since the S corporation produced no income for him.[IRC Section 212(1)]

Something I recommend clients, whenever possible and feasible, is to leave the S corporation open with some cash available for at least 12 months. This helps to capture and deduct unexpected expenses after the end of the S Corporation operations. If this person would have kept his S corporation open during 2018, he could have paid and deducted those expenses and then passed on the tax deduction benefits to him via the K-1.

If you dissolve your S corporation and later have corporate expenses, then you’re stuck with no deduction when you pay those expenses personally. If you decide to close your S corporation business, consider keeping the business open for an extra period of time to ensure you receive all income and pay all expenses, or make sure to resolve all potential accounts payable prior to closing the business.

Since you incur costs for keeping the S corporation open (tax return filings, state franchise taxes, etc.), you need to weigh the additional costs against any lingering accounts payable or other expense issues that could arise.